On October 24th & 25th, 2008, a diocesan pilgrimage was held to honor the first priest of our diocese and fellow-worker of St. Raphael of Brooklyn:

On October 24th & 25th, 150 pilgrims - His Grace Bishop BASIL, 20 priests, 5 deacons, family and faithful from 23 parishes and missions throughout the Diocese of Wichita and Mid-America - gathered to honor the memory of Father Nicola Yanney on the 90th anniversary of his repose.

The Reverend Nicola Yanney, a native of Fi’eh, Lebanon, emigrated to the United States, arriving in Nebraska on December 1st, 1892. During his lifetime, Fr. Nicola was a man of several notable firsts. On April 3rd, 1904, Fr. Nicola became the first priest to be ordained by Bishop Raphael of Brooklyn after the saint’s consecration to the holy episcopacy. Taking up the cross of his priesthood and returning to his parish of St. George in Kearney, Nebraska, Fr. Nicola became the first resident Orthodox priest in what is now the Diocese of Wichita and Mid-America.

During his pastorate, Fr. Nicola continued the work of his father in Christ, St. Raphael, by traveling extensively throughout the region and ministering to the scattered Orthodox faithful. Fr. Nicola spent four months of each year traveling to many places, holding services, performing baptisms, weddings and funerals, teaching the faithful and gathering Christ’s flock into parish communities. The boundaries of Fr. Nicola’s “parish” stretched from the Rocky Mountains to the Mississippi River and from the Canadian border to the Mexican border. While serving the faithful in Kearney, Father Nicola also founded a number of parishes throughout the region.

While selflessly ministering to his flock during the epidemic of 1918, Fr. Nicola fell victim to the Spanish influenza. Visiting the sick and suffering up until his very last day, he died on October 29th, 1918.

Priest Nicola Yanney - wearing his ordination vestments, given to him by Czar Nicholas II. Fr. Nicola is holding the Gospel Book presented to him by his parishioners in 1909, which is preserved and still occasionally used at St. George to this day. 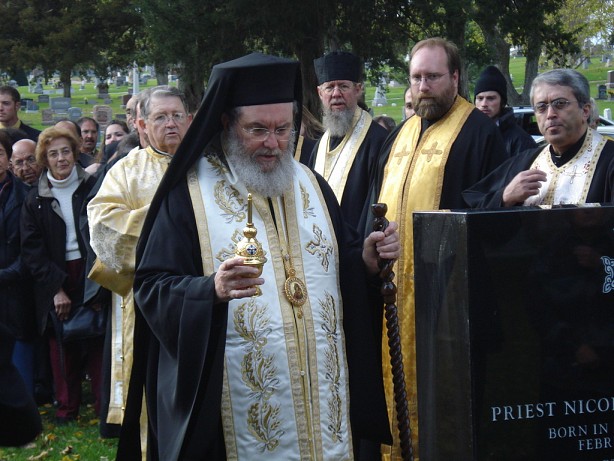 The consecration of the grave of Father Nicola Yanney and the blessing of his new gravestone, offered by the Clergy Brotherhood of the Diocese of Wichita and Mid-America. The Trisagion Prayers of Mercy for Father Nicola (who reposed on October 29th, 1918). During the Hierarchical Divine Liturgy at St. George Church. The blessing of the new gravestone of Khouriya Martha and the Yanney's infant daughter Catherine, offered by the Rocky Steinbrink and Nick Shada families.

Slideshows of the Pilgrimage Weekend

Images from the life of Fr. Nicola